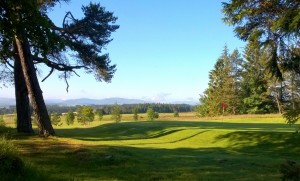 In 2015, West Linton Golf Club was 125 years old. It was founded in 1890 by Robert Millar, and since its inception has always had equal membership for men and women.

Then Captain, Colin Robertson remarked on the occasion of our anniversary:

“In the run up to marking the Club’s 125th anniversary I’ve had a look back at the Club’s history. This was made much easier by reference to the book – The Days We Went a’golfing – created for the 1990 centenary by Tom Slattery and Charlie Gray. It’s perhaps obvious to many that the game and West Linton Golf Club haven’t really changed so much over 125 years. Yes, the equipment we use has benefited from modern innovation, but the landscape, the rules, and the love of the game are very much the same. If Robert Millar was to return today, I’m sure he would readily recognize the place and the game.  The challenges we face today running the Club are not so different from the challenges the early council faced at the end of the 19th century. One remarkable document lists the complicated set of tariffs for membership of the new Club (apparently only Robert Millar himself could understand them), and today we have our current flexible membership options to encourage more participation. Our history got us to where we are in 2015, and I’m certain that West Linton Golf Club will continue to evolve responsibly. Here’s to a long and enjoyable future on our cherished turf.”